skip to main | skip to sidebar

Boys and Heights and Trips to the ER

Giving Thanks for God's Kind Providence

Until this month, we hadn't been to the emergency room much at all, especially considering we have four boys age eight and under. But on Labor Day our 3-year-old got bumped off the porch by his three brothers and landed right on his arm. After lots of tears and howls, a trip to the hospital, and a few x-rays, we learned that we had our first broken bone. But a few days ago he abandoned his little sling, and all was well.

Until today, that is, when our 5-year-old tried to climb a tree with the aid of a bungee cord. He hooked it on a branch above his head, grabbed on tight, and started to pull himself up. (Go ahead and cringe now, because you know what's coming next.) Just as he started to lift himself off the ground, WHAM! That deadly metal hook slipped off the branch and nailed him right between the eyes.

It was pretty gory there for a while: a trail of blood through the house, a jagged hole in his head, blood in his eyes and running down his nose… Once again my truck became an emergency vehicle, carrying one of my precious little treasures toward rescue. Ironically, he had just been at his doctor’s that morning for a scheduled visit, so they were all ready with his chart and insurance info. 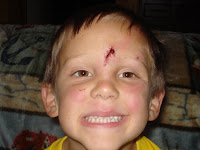 I’m amazed at how tough these little boys of mine are. Our youngest didn’t take another drop of pain medication for his broken arm after leaving the hospital, and this little guy today took four shots of anesthetic directly in his torn forehead. Phew! Six stitches and a vanilla shake later, and we were on our way home again, not too much the worse for wear.

But what amazes me more than anything is the goodness of God that watched over both my boys during their mishaps. All the way to the doctor’s today, I couldn’t help but imagine what would have happened if that metal hook had hit him an inch or two to either side. As he himself said at the doctor’s office: “Yeah, then I would have needed to get a wooden eye!”

I don't know how people with kids aren't nervous wrecks. I couldn't handle it.

The wild, wild west is bringing out the cowboy in your boys! Scars, my friend. Scars make the man. That's what country music tells me anyway. Yeah, baby.

I hate not being there when they get hurt. :( Guess I have another package to send :)lol

Sending my love and hugs to Johnzy.
Emilee

And trusting Him, too, which is the only way we avoid being nervous wrecks! But you learn after a while that kids are kind of like cats that way - they usually "land on their feet."

The boys are definitely loving the wild west. They've caught a few snakes in our yard, we have a little campfire almost every night, and they are constantly asking if we can drive over to the mountains. But they still complain when I turn on the country music!!

Em, they are looking forward to your visit. Bring lots of hugs with you when you come!

oh my word...i HAD to laugh. i would've been a wreck had i been there, but yeah, i could just picture the whole thing. good NIGHT! scary, & sooo thankful it hit him where it did, & not in the eyeball. tell that boy auntie kelley loves him.

and sneak a kiss in to julia too for me while you're at it. i miss that booger.

...wow...that is a serious/funny pic. Not seriously funny mind you...just serious/funny. The caption should read...

Seriously though, I'm glad he is ok...and built of indestructable components apparently!

Kel,
I think his little remark in the doctor's office is hilarious, and it shows so much of his personality, too: innocent, good-humored, resilient...

Rick,
Love the caption! He's got those good hardy Waltz genes - I'd recommend building your own kids out of the same stuff, my friend :)

Well, Kelley brings that all-so-crucial Waltz Bionic Gene...so the kids will have at least half of the same stuff!

Yep, that's what I was trying to say. Thanks for clearing it up, Kel!

yup...I'm a dork. at least we are all in agreement!

Josh
Parker, Colorado
My greatest passion in life (and I’d commend it to you as the most satisfying, unpredictable, and exhilarating way to live) is to magnify Jesus Christ in everything I feel, want, think, say, and do. The specific targets I’m aiming at with my life are to be a passionate lover of God and people, an adoring husband, a devoted father, a masterful teacher, a published writer, and an original thinker. I'm always happy to take private comments and/or questions at josh@phbf.org.